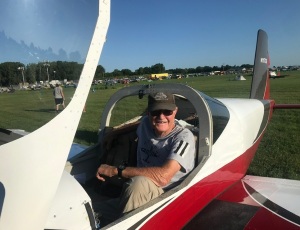 Flyfishing on the Sacramento River with his son Michael…. Driving across the US and flying around the world with his wife Jo…. Hiking in the Santa Monica Mountains with family and friends…. Growing the best tomato in Lobo Canyon…. Building, and flying, his experimental RV-12 airplane….

Gary Blaine Krause was born September 22, 1940, in McAlester, Oklahoma, and spent his life in Southern California, passing away on May 11, 2022, in Camarillo, California.  He is remembered for his kindness and loyalty, quiet compassion and friendship, bravery and intelligence, and especially for his inventiveness and creativity.  Like a deep and calm river, Gary provided a steady current of support and love to the people in his life.

Gary graduated from Birmingham High School in Van Nuys, CA, in 1958, with friends that would last a lifetime.  He attended Pierce College in Woodland Hills, CA (where he would later serve on faculty for 25+ years), Oklahoma State University on a Track Scholarship, and ultimately earned his BS in Mechanical Engineering at Cal Poly Pomona in 1966.  During this time, he travelled to Europe with friends Jody La Chance, Bob Prado, and Mike Sronce; he got his private Pilot License (1964) and served Active Duty in the Army National Guard.  After graduating, he worked as a flight instructor at the Van Nuys Airport for 2 years before serving in Dong Tam, South Vietnam, in the US Army’s Mekong River, Artillary-9th Infantry Division (1969).

He married Linda Hoff in 1968, and together raised their beloved son, Michael, who shares his passion for flying (fishing and airplanes).  Gary worked as a private practice Landscape Architect from 1971 until joining the faculty at Pierce College as Professor of Landscape & Horticulture in 1979 where he worked until he retired in 2005.  Linda passed away from cancer in 1995.

In 2002, Gary married for the second time to fellow Landscape Architect, Jo Ann Hutchison Rosdahl.  Their home in Lobo Canyon served as a temporary respite for grown children and grandchildren, vacation destination for same, and a venue for weddings, bocci ball tournaments, tequila taste-tests, and yes, the best home-grown tomatoes ever.  Gary and Jo traveled the US in their 5th Wheel and around the world (via American Airlines, of course).  Gary fulfilled a lifetime goal of building an airplane, the RV-12, finishing it in 2011, the same year he flew the P-51 Mustang.  In 2018, Gary and Jo moved to Camarillo to be closer to Michael and his young family, and to make it easier to hang out at his hanger at the Camarillo Airport.  A chronic incurable digestive condition took his strength and life over the past year.  Our memories of him, like the deep and strong river, continue to give strength and love.